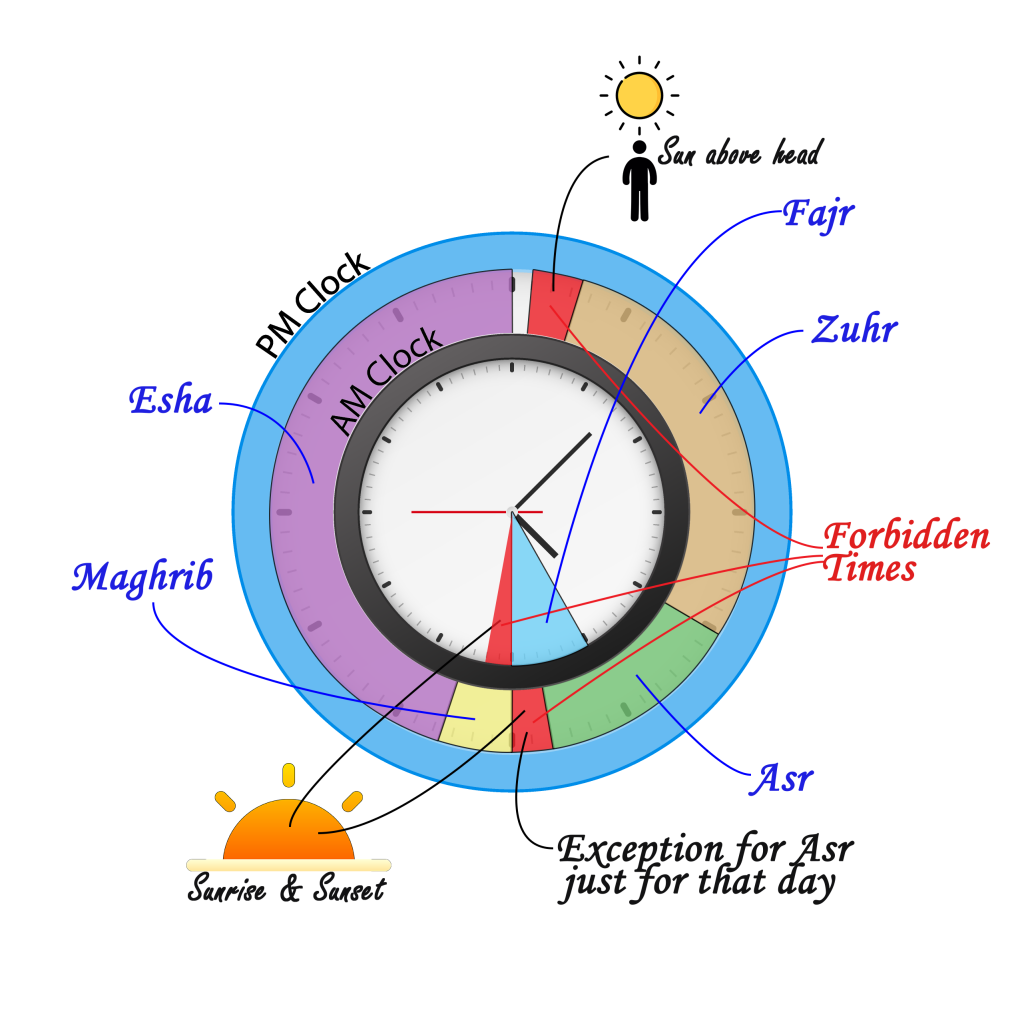 There are 3 times when Salat or Prayers are Forbidden or Haram. The times when the prayers are prohibited, are at the time of Sunrise, Sunset, and Zawaal. Now let’s try to discuss these in more detail.

The Time of Sunrise

It Starts from: the time when the first portion of the sun can be seen on the eastern horizon;

It Ends when: the entire Sun has become visible. It is safe to start the Salat after the sun has risen to the height of a spear.

Nowadays, this is regarded as about 12(twelve) minutes after the sun starts to rise, but to be on the safe side we may consider it to be around 15(fifteen) to 20(twenty) minutes. Please try not to hit this time.

The Time of Sunset

It Starts from: the time when the Sun just touches the western horizon; It is also said that it starts when the sunlight becomes pale.

It Ends when: the entire Sun disappears.

This may be considered about 12(twelve) minutes before sunset, but to be on the safe side we should consider it to be around 15(fifteen) to 20(twenty) minutes. If necessary, try to set a reminder to get your Salat done before you hit this time.

However, if any person somehow couldn’t pray his/her Asr Salat, he/she can pray that particular Asr waqt of that day, even if it reaches the forbidden time of Sunset. But this particular rule applies only to the Asr Prayer of that particular day and we are not allowed to pray other salat in that time.

There are 3(three) times at which the Messenger of Allah (pbuh) forbade us to pray:

In this Hadith it has also been mentioned that the last time for our Isha prayer is the midnight. {Sahih Muslim Book 5, Hadith 223}

Similarly, Sahih Al-Bukhari; Hadith 1191 indicates that it is Makrooh(not recommended) to perform Voluntary or Nafl Prayer after Fajr and Asr Salat – as it may hit the forbidden times.

As we all know, many books were revealed(sent) to the Prophets by Allah(swt). Among these 4 are mentioned by name in the Quran: